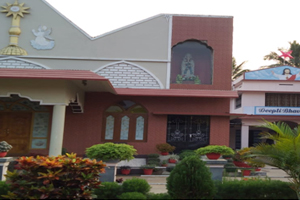 Go therefore and make disciples of all nations”. (Mt 28:9) Responding to the missionary call for evangelization, the SABS sisters stepped out from St. Mary’s Province Kothamangalam, Kerala to south Odisha in 19 71 and Punjab in 1973. Our sisters came to Odisha mission on 5th January 1971 at the request of Rev. Fr. Mathew Onattu C.M. With the special intervention and blessings of the Eucharistic Lord Deepti province had a humble beginning in the Berhampur Diocese, Odisha. And they took up the apostolate of education first time in the remort mission field. In the benevolent designs of God the sapling of St. Mary’s Province Kothamangalam, planted in the soil of Orissa and Punjab was raised to the status of a region on 1st October 1986 and was named as the Jai Rani region.

In the course of time more convents were opened in various parts of the diocese of Berhampur and Andhra Pradesh. To share the Eucharistic love with the brethren and thus to draw all to the Eucharistic Lord sisters are involved in different activities namely education, healing ministry, evangelization family apostolate and Social apostolate in different parts of Odisha and Andhra, where there are difference of race, religion, caste, culture, custom and a gulf between the rich and the poor.

After a heroic beginning and producing tangible results in the different parts of the dioceses on 23rd October 1995 we celebrated Silver Jubilee of Odisha Mission. On 25th March 1998, Jai Rani Region was declared as a vice province by Rev. Mother Thecla, the Superior General and Mother Elizabeth Pattaparambil was elected as Provincial Superior of Jai Rani Vice Province. The divine providence of God and the untiring missionary zeal helped the sisters for opening new centers of apostolate in different parts of the diocese of Berhampur, Visakhapatnam and Srikakulam. We have also started perpetual Adoration in three centers- which are the power houses of our Province.

For the better growth and development Jai Rani Province, Punjab-Orissa was bifurcated in 2002 in the General-Synaxis and declared by Rev.Mother Thecla, the Superior General about the erection of Deepti Province on 3rd May 2003. Mother Eymard was elected as the first Provincial Superior of the Deepti Province. By the immense love of God, on 3rd October 2005 the newly built Provincial house at Rayagada was inaugurated and blessed by the Vicar General of Berhampur Diocese.At present Deepti-Province has 16 convents in the dioceses of Berhampur Odisha, Srikakulam, Visakhapatnam Andhra Pradesh, and in Erlangen-Germany and one in Kerala-Anicad the mission home. There are 59 senior sisters, 15Junior sisters, and 23 candidates in the formation. Our little Province is striving forward with its vision and dreams, i.e. To become a constant adorer and a moving Tabernacle as Mary and to lead the hungry humanity towards the Eucharist, the living bread and fountain of eternity”.