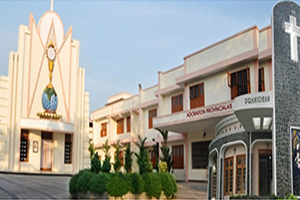 Once Kothamangalam province was bifurcated from Ernakulam, the Sacred Heart Province of Ernakulam shifted its provincial house to Kalamassery and the province celebrated its golden jubilee in 1980. The province became missionary oriented in 1968 by starting its first mission house at Damdima in West Bengal. The zeal and vigour that followed afterwards resulted in the erection of Christu Jyothi region of Satna in 1986. The first house in the diocese of Thrissur was started in 1986, and in the diocese of Palakad it was in 1991. Now the houses in both these dioceses have been erected as independent provinces. The province bear witness to the Eucharistic Lord in Germany from 1959 and in Italy from 1984. Apart from the field of education, reading the signs of the time, sisters extend their apostolic activities in fields like FBA, jail ministry, protection of street children, rehabilitation of prostitutes etc. At present under the efficient administration of Mother Thecla, who served the congregation as the Mother General, the province has 50 houses spread out in India, Germany, Italy and United States. Sisters work in African mission too.