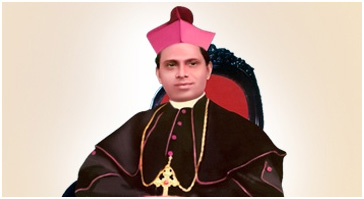 Thomas Kurialacherry, fondly called as Kunjuthomachen was born on January 14th, 1873 at Champakulam in Changanacherry, Kerala to Chackochen and Accamma. As a child, he grew up with extra ordinary goodness and piety. From his tender ages onwards Thomas had a special devotion to the Eucharistic Lord and Blessed Mother. To be a priest was his lifelong desire and he took the decision for priesthood while he was studying at Mannanam. While having his seminary education in Rome, being influenced and inspired by the Perpetual Adoration sisters who used to spend their day and night in adoration before the Blessed Sacrament, he received an inner call to make the Eucharistic Lord known, loved and adored by all, always and everywhere. During the nine years he spend at the Propaganda, he excelled in everything and in the College register it is recorded about him as the first in everything, thebeloved leader of the classmates and a zealous missionary.
He had his ordination on 27 May 1899 from Cardinal Cassantha, and he offered his first Holy Mass in the chapel of Jesu that belonged to the Jesuits. On his return he pursued the inspiration to promote Eucharistic devotion in his own homeland by all means. It was mere providence that he met with Philomina Vallayil, who later came to be known as Mary Francesca de Chantal, who had a deep desire to become a nun and who shared the same charism. With her co-operation, he founded the Adoration Congregation on 8th December 1908. In 1911, Fr. Thomas Kurialacherry was elevated as the Vicar Apostolica of Changanacherry, which led to the further growth and subsequent spreading of the congregation in different Syro-Malabar dioceses of Kerala.
Bishop Kurialacherry was a zealous social reformer and a person who was enthusiastically involved in bringing transformation to the marginalized sections of society. He was a faithful son of the Church. As a priest and a bishop, he was a good shepherd who cared for the sheep under his care. As a social reformer, he stood for equality, peace and justice for all. His prophetic voice resounded throughout Kerala against social evils. He brought the Dalits into the main stream of the Catholic community. A man of ecumenical vision, he worked for the unity of various Christian communities. As a man of compassion, he was a joy to those in sorrow, refuge for the afflicted and a soothing presence for the suffering. As an educator – he was a lamp to those who were moving in darkness – a man of great intellectual vigour. Being a strong advocate of education, Mar Thomas started several educational institutions including St. Berchman's College at Changanacherry. His 113 pastoral letters bear witness to the apostolic zeal for the spiritual welfare of the people of God. Above all, he was a man of God, an ardent devotee of the Eucharistic Lord. Mar Thomas laboured assiduously to instil devotion to the Blessed Sacrament among all the faithful by vigorously promoting “40 and 13 hours devotions” and solemn Holy Hour celebrations in the parish community.
When he prepared for his ‘adlimina’ visit to Rome, he had a conviction that it would be his last journey. It was the Silver Jubilee year of his ordination and he had planned to participate in the beatification process of St. Therese of Lisieux. Before leaving, he entrusted the sisters to the Immaculate Virgin Mary and asked forgiveness to all for his shortcomings. Reaching Rome, the seminarians from Changanacherry studying at Rome, invited him for Holy Mass at Propaganda College, which he readily accepted. Though tired, he offered Mass, but fainted after that. Thus he offered his first Holy Mass and his last Mass at the same altar. He wascalled to eternal reward on June 2nd 1925. His mortal remains were brought back to Changanacherry in 1935 and interred in the Metropolitan Cathedral church. In 2014 March 25, the mortal remains were transferred to the newly built chapel called 'Marth Mariam Kabaridapalli' attached to the Metropolitan church.
All were convinced that Bishop Kurialacherry was a saintly man. Sisters as well as people outside began to pray for him for favours. The continuous stream of pilgrims to his tomb and the graces and favours received through his intercession, gave impetus to the desire of seeing Mar Thomas raised to honours of the altar for the greater glory of God and the good of His people. The cause of beatification was started in 1983 at Mar Thomas Kurialacherry Vikas in Changanacherry, and the diocesan process was completed in 1991. The present postulator is Rev. Msgr. Paul Pallath. The “Positio” illustrating the heroic virtues of the Servant of Godwas submitted to the Sacred Congregation for the cause of Saints in 1996. A team consisting of 8 Theologians and a Promoter of Faith studied it and unanimously voted in 2010 March 26 that our Founder exercised heroic virtues. The ‘Positio’ was taken for study and discussion by the Cardinals and Bishops in the ‘Congregation for Saints’. They approved this and the Pope produced the decree recognizing the virtuous life of the Servant of God, and he was exalted as‘Venerable’ in 2011 April 2. A first class miracle further will beatify him, and again a further miracle will pave the way for him to be canonized.

SABS Mother House, Champakulam built by our founder in 1910

Residences of our Founder at Champakulam

Our Lady of Rosary in Pompei

At the tomb of Mar Thomas Kurialacherry Founder

Celebration of the Episcopical Consecration of Venerable Mar Thomas Kurialacherry

9. A DOCUFICTION ABOUT MAR THOMAS KURIALACHERRY