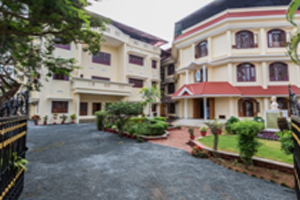 It was a long cherished dream of S.H province, Ernakulam to extend their services to the diocese of Thrissur and Palakad. The first house was opened in 1986 at Palayoor in the diocese of Thrissur. As the number of houses increased, Nirmal Rani Region was erected on 15th August 1999 as a dependant region of the Ernakulam province. Sr. Cyrilla was the regional superior. This region was elevated to the status of a Vice Province on 11th January 2001 with 8 houses and Mother Cyrilla was elected to be the first provincial superior. Nirmal Rani was made a province in 2003. At present the province has 14 houses in Kerala, including Novitiate House and houses for initial formation. The new province took the courage to venture into the mission by starting a house in Sagar diocese in the state of Madhya Pradesh in 2008. Sisters from the province work in Germany, Italy, United States and Kenya. In December 2006 Mother Mercitta Kannampuzha was elected as the Provincial Superior which has added new momentum to the growth of the province.