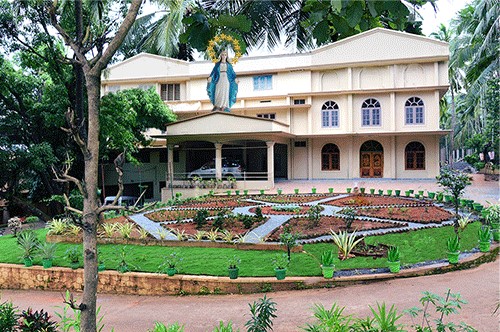 In the great Jubilee Year 2000 a new feather was added to the Sacred Heart Province Ernakulam. The inner vision and requirements, made Resp. Rev. Mother Lambert the Provincial Superior of Ernakulam, to take the first step for the formation of Palakkad Region. The new Region was inaugurated on March 4th 2000 as Vimal Rani. Mar Jacob Manathodath Bishop of Palakkad preside the inaugural function, blessed by the presence of Mother General Rev. Mother Thecla and Provincial Superior Rev. Mother Lambert (EKM). All convents in Palakkad district and Tamil Nadu coming under this region. In the initial stage sincere services were rentered to the region by EKM provincial house. Rev. Sr. Hyginus was the first regional superior, Rev. Sr. Tessy Chamakkala, Rev. Sr. Rosalia Aricatt (councillors) Rev. Sr. Rose Chiramel (Finance offiecer). The regional house was started in an old pickle company with very little facilities. At the starting there are only 5 houses and 35 sisters in the region. The provincial synaxis (December 2000) elected Rev. Sr. Hyginus as provincial councillor in EKM, Sr. Gails was appointed as the 2nd regional superior, Sr. Raphael, Sr. Dometila (Councillors), Sr. Rose Chiramel (Finance officer). During this time the construction of the new house was completed and was blessed by Mar Jacob Manathodath Bishop of Palakkad on November 25th 2003.

Unfortunately 1 November 2012 Adoration Convent Sant’Anna Caltagirone in Italy which was started on 1984 was closed.

It was at this time that a long cherished desire to have a transit house was realised. The convent in the parish of Koodapuzha is really a blessing to the province.

27 September 2018  Waiblingen community in Germany with three sisters  was raised to a convent. It is known as Holy Spirit Convent.

At present Vimal Rani Province have 15 houses, 8 in Kerala 4 in Tamil Nadu, 2 in Germany, 1 in Corpus Christy, USA.