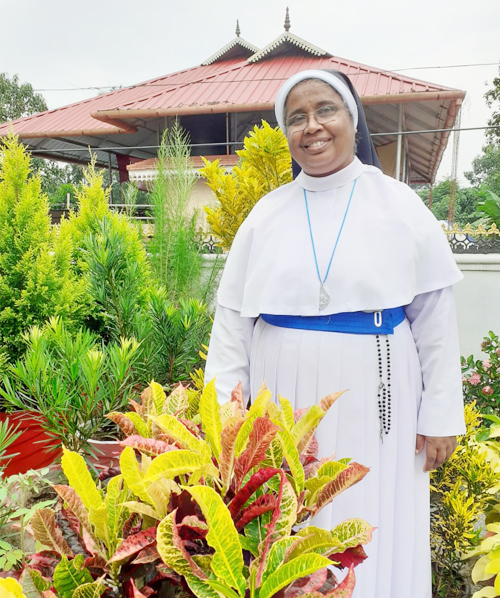 Mother Grace Perumpanany SABS elected as the Superior General on Dec. 8, 2015 in the General Synaxis held at Cenacle, Aluva is a person of deep prayer and humble service.
She was born as the eldest daughter of Mrs and Mr Thomas Perumpanany on 10-06-1954 at Marika in the Marika Parish of Kothamangalam diocese. Hearing the call of the Eucharistic Jesus to follow Him by becoming an adoration sister, after her graduation in Physics in the Assumption College Changanacherry, Gracy Thomas joined as an aspirant to the adoration congregation in the provincial house at Thodupuzha. Having completed the initial formation and novitiate, she received the habit of SABS and made her first profession on 03-05-1977. After 6 years she made the perpetual profession on 09-12-1983 at Cenacle, Aluva.
Holding a masters degree in Education (M.Ed), she taught in many schools in the diocesian corporate management. Having undergone a training in formation of religious candidates, she was appointed postulant directress, novice directress and Junior directress in the province and also as the formation co-ordinator of the SABS congregation.
She was elected provincial councillor of SABS Kothamangalam Province in the year of 1988 and then Provincial Superior in 2003 for two terms. In 2009 she was elected as the Vicar General of the congregation and then as Superior General in 2015.
Trusting in the providence of God and the Blessed Mother, she is dedicated to lead the sisters of the SABS congregation to attain the motto of the 19th General Synaxis: REJOICE, RADIATE JOY.