Cenacle, the SABS Generalate, located at Karukunnu near the Pontifical Seminary at Aluva, had its foundation stone laid in Dec. 1964, on the occasion of the Eucharistic Congress in Bombay. The name 'Cenacle’ was coined in memory of 'Sehion’ that witnessed the institution of the Holy Eucharist and the coming of the Holy Spirit. The Generalate was blessed on 18th March 1969 by His Eminence Cardinal Joseph Parekattil and is rightly called the power house of the congregation, the force that binds all the sisters together.

Keeping in mind the personal spiritual renewal of sisters, a Cloister was already functioning at the Generalate right from its inception, which gave sisters 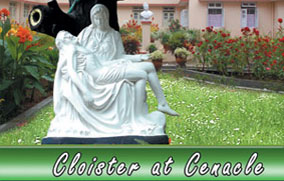 an opportunity to keep themselves aloof from the hectic of everyday life and to gain strength and life from the life-giving waters of the Eucharist. Sisters can opt for a cloistered life of 3 months in the Cenacle cloister. 40 days retreat, intense prayer and study, night adorations, life of asceticism and self-sacrifice etc. make these 3 months rich and fruitful.

Adjoining the Generalate, we have a Theological Institute which is affiliated to the Pontifical Institute Aluva,  named Sion Vidya Bhavan. Before the perpetual profession, The junior sisters from all the provinces come together for one year theology course. Eminent Theologians and professors from different parts of India and members of different religious congregations  are resource persons for the course. The present Dean of Studies in the Theolagate is Sr.  Regi Kunel SABS.

Also the Junior sisters have a Pranidhan Course (Common Juniorate) for 5 months from Dec. to April in which, they intensely prepare for their perpetual profession.

In 2008,  as a centenary memorial a grotto of Our Blessed Mother Mary was constructed in front of the Generalate and a Piatha was erected and blessed within the Cloister walls of Cenacle. The chapel too was renovated beautifully during the centenary days.

General Administration Team
The general team on which the central administration of the congregation is vested, functions from Cenacle.  The present team is elected on 8th Dec. 2015.