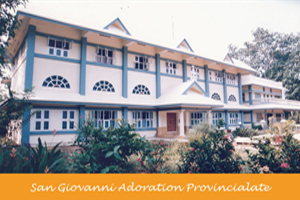 St. John’s Province, Kanjirapally was officially erected in 1978, when Kanjirapally diocese was formed. Mother Marie Therese was the first provincial. The province since its starting was eager to reach out to the remote areas of the Highrange to witness the Eucharistic Lord and to lighten the people with true light. The province continues its steady but slow growth under the able leadership of Mother Rachel Vellakada. Responding to the signs of the times, yet holding on firmly to the charism of the congregation, the province has taken up the mission areas of Gorakhpur and Chanda, where the sisters work dedicatedly for the cause of the poor and illiterate people. Moreover, in the Kingdom of Nepal, sisters are engaged in education, hospital ministry and extend helping hands to the HIV/AIDS affected people. At present the province has 46 houses in India and abroad. The province has houses in Germany, Switzerland and Italy too. Sisters work in the African mission too.