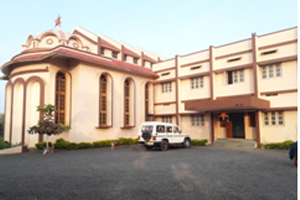 It was on 18th October1970 (Mission Sunday) that five sisters, Srs.Fabiola, John Berchmans, Geo Maria,Tomsita and Stella Maria from Pala Province,Kerala,reached the city of Ujjain.The main challenge faced by them was to work in a new missionary context. Many were the hardships they had to face, the unfamiliarity with the language, culture and customs. The literacy rate of the Region was very low. Hence the sisters were motivated to work in the educational field, both formal and informal.

The General Synaxis of 1997 decided to raise the mission to the status of a vice province. Then it had 11 convents, 47 senior sisters, 16 juniors, 3 novices and 4 aspirants. On 22nd March 1998, Jyothirmai Vice Province was erected by Mother Thecla, the Superior General. Mother Maria Karotemprel was elected the first Provincial Superior.

At present Jyotirmai Province has 20 convents in the Dioceses of Pala, Ujjain Indore, Kalyan, Jhabua, Bhopal and Khandwa with 105 sisters involved in different apostolic activities of education, Healing Ministry and Social Apostolate.